Join us Friday, April 9 to get the latest organizational and industry updates from aerospace organizations, access career resources, and enjoy networking with your peers during our virtual spring meeting.

The discounted member price of $25 provides full access to an afternoon of insight, education, and networking. Non-member admission is $125. To access member pricing, become an OBAP member.

After the Summit ends, join us for a virtual mixer from 7-9 PM EST. We'll wind down to live entertainment and cultivate our connections during this closing reception. This event is free and open to the public. 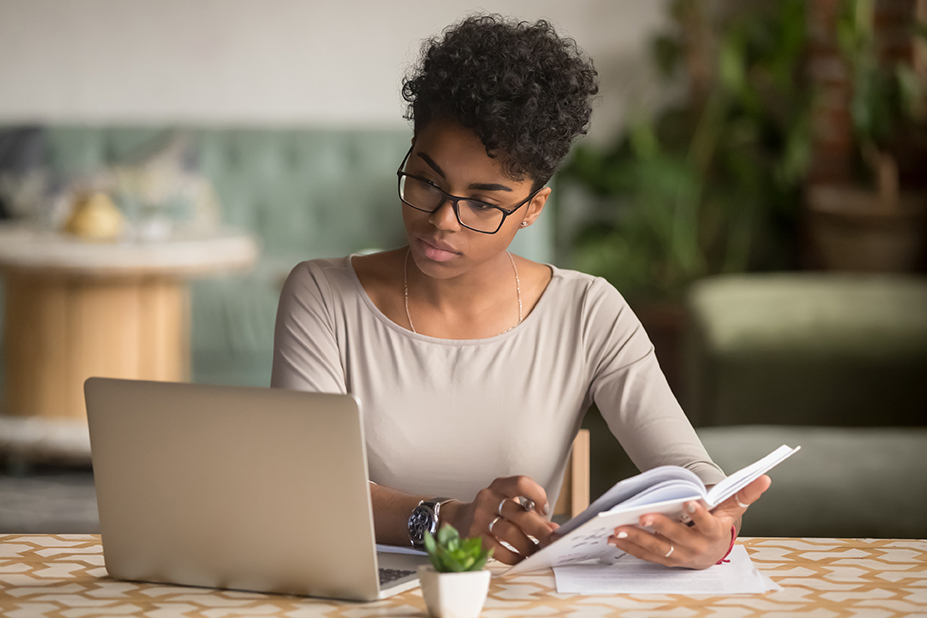 This year’s Digital Summit is designed to help you take your career to the next level. The event starts with a general meeting of OBAP members and continues with an industry update from Raven Career Development a company that provides clients in the aviation industry with a personalized career development plan, developed with their background, skills, and goals in mind to find their dream aviation job. Then, learn from the first-hand experiences of senior industry professionals as they share their journey through aviation and answer any questions you may have. We’ll close the day with information about our APDP program and opportunities to inspire the next generation of aerospace professionals. You don't want to miss this event.

Dr. Valerie Manning is Airbus’ SVP of Training & Flight Operations Support, based in Toulouse, France. In this role she manages Airbus’ flight, maintenance, cabin and structure training, its flight simulation business, its Navblue subsidiary, and its flight operations engineering, support and Training standards. Prior to taking this role, she was the SVP of Customer Support, responsible for the in-service relationships with airline, lessor, and MRO customers worldwide for operational, technical, safety, regulatory, and commercial topics. In that role Dr. Manning also led sales, marketing, consulting and contracts for the Airbus Services business, as well as the Customer Services regions around the world.

Dr. Manning has held roles as the head of Airbus’ Upgrade Services business, performing modifications on the in-service Airbus fleet, managing the CTO office, and leading U.S. Mergers & Acquisitions. Dr. Manning was a consultant with McKinsey & Company and also consulted privately in multidisciplinary optimization and supersonic aircraft design. An active instrument-rated pilot and Flight Instructor in Europe, Dr. Manning graduated from Princeton University with a B.S in mechanical & aerospace engineering, and earned her M.S. and Ph.D. in aeronautics and astronautics from Stanford University. Dr. Manning served a full career as an officer in the United States Air Force, both on active duty and in the reserves. 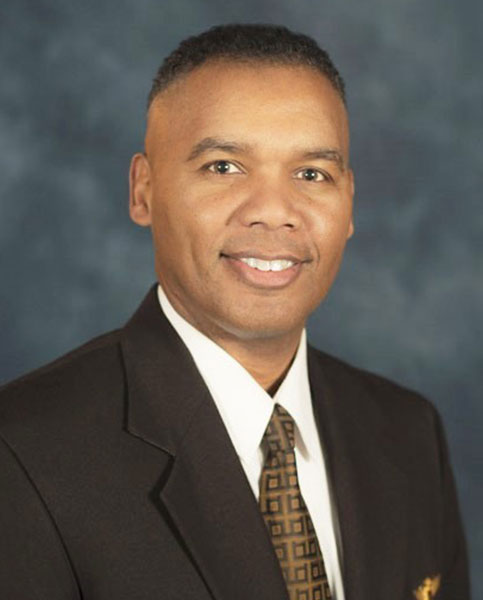 Flight Operations: How to Level Up to Leadership

As Vice President of Flight Operations and Safety, Captain Mills has global oversight of and responsibility for UPS Airline Flight Operations, Training, Regulatory Compliance, and Airline Safety. He has previously served numerous positions of increasing responsibility, as an FAA-designated check airman, and remains current and qualified as an international Captain on the Boeing 757/767.

Houston currently serves as one of 35 executives on the FAA Drone Advisory Committee, where he chairs the Operations and Technology Subcommittee and brings an airline and pilot perspective to a group of other transportation and technology. leaders as they explore policy considerations for unmanned aerial systems (UAS) integration into the National Air Space System. He also serves as the Chairman of the Cargo Airline Association Board of Directors, and member of the IATA Safety Flight Ground Operations Advisory Council, and the Airlines for America (A4A) Safety and Operations Councils.

Houston began his aviation career in 1985 as a Marine Corps officer and F/A-18 fighter pilot where he was certified as an air combat tactics instructor (ACTI). He served the United States in Operations Desert Shield, Desert Storm, Restore Hope, and Southern Watch. He has more than 100 aircraft carrier landings to his credit.

A native of Indianapolis, Houston received a bachelor’s in English literature from Wabash College and an MBA from Webster University. In step with UPS’s commitment to the community, Houston serves on the national Board of Directors of the National Center for Families Literacy, Association for Unmanned Vehicles Systems International (AUVSI), The Organization of Black Aerospace Professional Board of Advisors, and is president of the Marine Corps Coordinating Council of Kentucky. 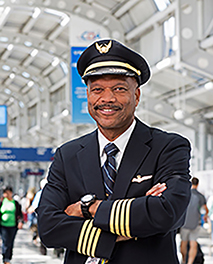 One-on-One with the Chief Pilot

Captain James T. Simons Jr. has over 40 years of Military and Civilian aviation experience in flying, supervising, and managing aviation assets. James recently retired as only the second African American Chief Pilot in the history of United Airlines serving as Chief Pilot of its Washington Base.  As Chief Pilot, James supervised over 1400 pilots and was responsible for flight operations at Washington Dulles Airport, Washington National Airport, and Baltimore Airport.

As a United Airlines Pilot and Manager, he has been type rated in several aircraft to include the B-767, B-757, B-737. As a United States Air Force pilot, James flew the KC-135A and R model along with the T-38.  James has accumulated more than 14,000 hours of flight time piloting these various aircraft.

As the Washington Chief Pilot, James delivered results by providing daily operational leadership and direction to the Flight Operations Division from a field perspective. He ensured that the daily base operations were compliant with all FAR’s, the United Airlines Flight operations manual, and all corporate guidance. James served as a member of the local Station Operations team to ensure that Flight Operations input and recommendations were considered in station operating decisions. He also provided input to Corporate Safety, Flight Operations, and Air Traffic Systems management regarding operational and schedule-related issues. James was transparent in performing his primary job duties which included providing leadership and support to the base. James monitored pilot professional conduct, directed pilot counseling, and ensured consistent system-wide discipline standards. He also monitored, evaluated, and justified equipment, facilities, and base staffing to achieve Flight Operations goals.

James also served as the Assistant Chief pilot prior to being promoted to Chief Pilot. James was responsible for assuming all the leadership duties of the Chief Pilot when the Chief Pilot was not present. He conducted several investigations and hearings along with processing grievance and disciplinary actions for the base and participated as the Hearing Officer.

James served as a Standards Captain at the United Flight Training Center. In this position, James was responsible for evaluating new and senior pilots also conducting recurrent training as developed by Flight Operations leadership and the FAA.

James served 10 years in the USAF as a KC-135 A/R pilot, instructor, and evaluator pilot. He was responsible for standardization for all initial, transition, and upgrade pilots in the KC-135 fleet while stationed at CCTS, Combat Crew Training School, Castle AFB, California.

James has a Master’s degree in Public Administration from Golden Gate University, California, and a Bachelor of Science degree in International Affairs from the United States Air Force Academy in Colorado. James has a wife Judith, 2 children, and resides in Houston Texas. 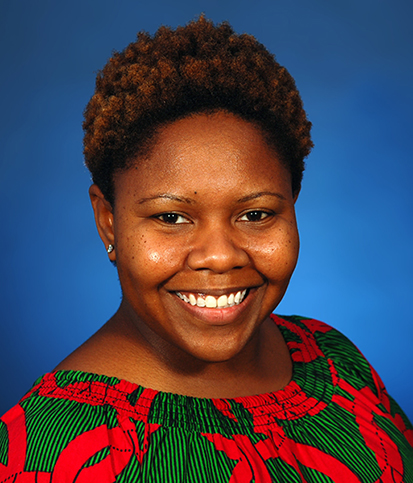 Management: Nurturing Your Team for Success

As Senior Manager of AQP for American Airlines,  Mary is responsible for curriculum design, maintaining AQP documentation, and ensuring regulatory compliance for all FAA-approved pilot training programs. Since joining American in 2019, she has also co-chaired the Operations Data Analysis Working Group (ODAWG), where all Flight Safety Management System (SMS) data is compiled and analyzed monthly.

With almost a decade of professional aviation experience in analytical, supervisory, and managerial roles, she began her airline career in 2008 with CommutAir, working in maintenance & HR. After a short stint at CIT Aerospace, she returned to United Airlines, where she had interned in college. There she gained experience in Aircraft Scheduling, Resource Planning, and Fatigue Risk Management before taking her final position as Pilot Training Program Manager for all Widebody fleets.

Mary has a BS in Aviation from Ohio University and an MBA from Embry-Riddle Aeronautical University, Daytona Beach. She enjoys volunteering in many organizations, including serving as a Pilot for the Civil Air Patrol for 10+ years, and is an Advisor for Sisters of the Skies (SOS). She lives in Arlington, Texas with her husband Michael & son London. 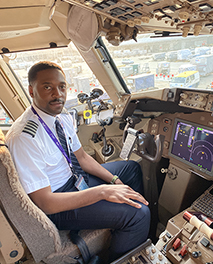 From Flight Instructor to First Officer: How to Catapult Your Career

Capt. Kelley has worked for numerous aviation organizations and in various capacities.  He has flown on-demand passenger charters in small passenger aircraft, worked as an instructor for pilots at a small freight company, managed a private jet for a wealthy client, as well as worked at three international airlines flying large Boeing B-757/767 aircraft around the globe.

Capt. Kelley currently works as the Senior Manager Regional Flight Operations Asia Pacific (APAC) for FedEx Express.  In this role, he oversees a small administrative staff at the company's Guangzhou, China (CAN) airport sort facility as well as contributing expertise to ensure regulatory compliance in ongoing projects throughout Asia.